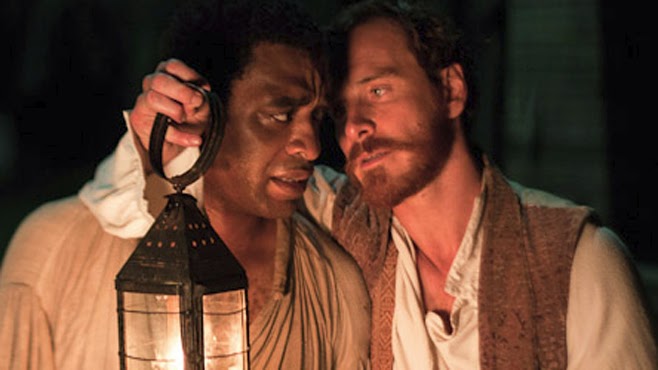 12 Years A Slave is the most important film of the 21st century. The most important since Schindler's List, and probably, one of the best and most vital films ever made. To say Steve McQueen's film is essential viewing is a comic understatement. Although there is absolutely nothing funny about anything going on.

If The Diary of Anne Frank is required reading in high schools across the country, then Solomon Northup's memoir, and the corresponding film should not only be required reading and viewing, it should be enforced reading and viewing.  There is simply no conceivable way to grasp the history of the United States -- nor the present, for that matter -- without the human catastrophe that is slavery shoved in your face.  Otherwise, we're doing ourselves, those who suffered through it, but most importantly the generations to come, a massive disservice.

Don't misunderstand me. This isn't just about reengineering white guilt. In a world where a white guy on the Miami Dolphins can slur his fellow teammate as a "half-n----- piece of shit" and then have his Black teammates back him up as an "honorary Black guy" while ostracizing the African-American victim as soft, proves that as much progress as we've made, we still have far to go.  Or rather, to be more precise, once we've achieved great social progress, the work doesn't end there because newer generations are going to plead ignorance of the fight of their forefathers. None of the Dolphins ever marched on Washington or personally witnessed Martin Luther King speak. They never had to experience the indignity of being refused service at a restaurant or being forced to use segregated facilities. If they had, there is no way they would condone, let alone support(!) that kind of behavior. This isn't a race issue, this is a human issue.

Chiwetel Ejiofor plays Solomon Northup, a prosperous freeman living in Saratoga Springs, NY with his wife and children. It is 1841, and Solomon lives a life of music and punctiliousness. One day, he is lured to Washington DC by two men who invite him to perform with his violin and promise exorbitant pay.  They take him out to dinner and their kindness overwhelms him. Turns out the men poison him and when he comes to he's chained to a wall in a building not far from the still unfinished Capitol.

He's not Solomon anymore, he's now Platt, and if he tries to claim that he is anything but a runaway slave from Georgia he receives a whipping.  And so his fate drags him from a slave ship, to a New Orleans slave market, and to one master then another. At each stop, the dehumanization is ratcheted up to incrementally extreme levels. But nothing -- and nobody -- is worse than Michael Fassbender's Master Epps. Here is the most vicious and vile character in film since Ralph Fiennes' Amon Goeth. Fassbender fully embraces his worst primordial instincts to create a character for whom there are no words sufficient to describe his utter depravity.

Shot in Louisana, the sweeping cinemotagraphy and the hauntingly beautiful shots of nature contrast grotesquely with the events happening onscreen.  This aesthetic style harkens back to Francisco Goya's striking paintings of the horrors occurring in Spain during the Napoleonic occupation.  And unlike Quentin Tarantino's Django Unchained there are no laughs or gags that make the slavers look dumb or incompetent.  No, in 12 Years A Slave, the villains all know precisely what they're doing. They don't make mistakes and even the slightest unusual movement of their victims is cause for suspicion and violent retaliation. When told by another kidnapped man that the only way to survive is to keep your head down and tell no one he's educated nor free, Solomon responds, "I don't want to survive. I want to live."

The truly frightening thing to ponder is that Solomon's story follows one man who faced this nightmare for twelve years before being rescued. This is a human travesty on a scale that is simply unfathomable. What about all the other slaves, who weren't literate, who didn't have connections in the North, who were born slaves and died slaves? Whose parents and grandparents were slaves and whose children would be slaves? This wasn't an isolated incident, but a recurring crime against humanity that went on for centuries and affected millions of innocent people.

History has a way of softening reality. Tragic events drift further away into the distance and become theoretical events read about in textbooks and spoken of in generalities. First hand accounts are truly the only way to preserve the funk, the realness, the truth, of what happened. Obviously there will never be any video footage of the horrors of slavery, but at least, with a film like 12 Years A Slave there will be a motion picture record that will live on in perpetuity for all generations hence, so that we can look ourselves in the mirror and say, "Human beings treated each other like this in the not-to-distant past, but we will never let this happen again."

Posted by Valentin Katz at 10:09 No comments:

Check out my music blog